In light of recent events, I’ve started to wonder how many strategies I once thought to be nothing more than extremely clever/creative gameplay would actually have been regarded as illegal exploits. As an example, I will share a method that Clare and I invented for potting back in 2006 (when it was useful), and you can be the judge!

As any competent potter knows, a key to maximizing success rates is to depress your stats as much as possible before casting marionette control. At the time this meant that you wanted to be in quagmire (lowers dex) and/or cursed (lowers luk). When I finalized my build, tropical sograts weren’t readily available, so it was very difficult to have both at the same time. This forced me to make a choice. I chose quag because it let me get away with a hybrid AB/potting build (without which it would have been nearly impossible to level) and because it produced better results (with curse, the more luk you have, the more resistant you are to getting cursed in the first place).

The next question was how to go about getting quagged. If I’d gotten another player to do it, I would have had to pot in PvP, and my dex would have been reduced by only 25 points–may as well have gone with curse in that case! I’d also have been leaving myself vulnerable to no small amount of griefing. I needed a monster with quag, but where could one find such a monster? There were two options as I recall: stings and jokers, both far from civilization… and from storage.

That’s when Clare came up with the brilliant idea of potting in the Kunlun Battle Arena. There is an NPC that summons “ghost” stings on demand. Unfortunately the idea posed a fresh set of challenges that prompted us, at least initially, to dismiss it. Later I developed workarounds for all of them, and this became my preferred potting locale.

The arena consists of a “fighting area” and a “spectators area” separated by a two-cell-thick wall. To get quagged by the sting, you have to be in the fighting area, which costs 500z to enter (spectating is free). After the monster is defeated or the time limit expires, anyone remaining in the fighting area is warped out. This confounded us because we needed to have the MC slave, the priest, and the linker in the same area as the potter. The breakthrough came when I found that the warp-out could be circumvented by being hidden or cloaked at the moment of activation. This enabled us to bring multiple characters into the fighting area and solved the first major hurdle.

Now we were faced with a second problem: the lack of storage in the arena. The Kafra shop had yet to be introduced. The only way to exchange items with the outside world was to have someone ferry them back and forth between the arena and the Kafra just outside… but how? We couldn’t bring our courier into the fighting area–not only would that have raised the effective storage fee by 500z, but it would have required every character in the area to hide to avoid being warped out. The MC slave could not hide without breaking MC, so that was out of the question. We were left with the spectators area, but the wall was just thick enough to prevent someone in it from trading with the potter… or so we thought.

Enter the TK. Flying kick is unique in that it allows you to position yourself on top of any monster or player that’s in your line of sight, even if that puts you inside a wall. (Ninjas have a similar skill, but it is not reliable.) By combining that with Cultivate Plant, we were now able to bring the TK one step closer, just enough to be able to deal the potter.

So there you have it. The arena proved to be so unpopular that in all the years I spent potting there, only twice did I see another person enter. 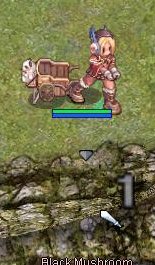 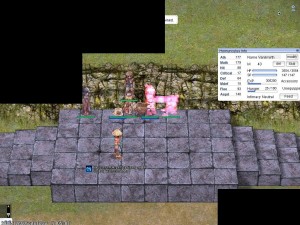