A strategy for ranged MVPs

Here’s a strategy I developed years ago for countering some ranged (attack range > 1) bosses, although we didn’t start using it extensively until late 2009. Several others have (probably independently) rediscovered it, and I won’t even claim to be the first since it “emerge[s] from the interaction of relatively simple game mechanics.” In other words, anyone giving it some attention would have been able to figure it out. However if you’ve never seen this before it’s still something to think about.

It relies on the key observation that “rude attack” doesn’t happen unless the attacker is outside of the monster’s range. I wrote a comprehensive list of the necessary conditions for “rude attack” on RagnaInfo, but the information was lost when Lune shut down his site. Anyway, from this it follows that if we attack a monster while we’re within its range but outside of its line of sight, it won’t teleport away and it can’t attack us either*.

Storm Gust is the perfect skill for this purpose because:

* That last reason is important; we use a pair of ice wall sets to keep the boss locked in place. Note how this placement conveniently leaves a free cell that enables us to splash the target with Storm Gust. 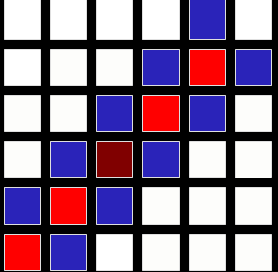 This video was recorded when I was leveling a high wizard from 70 to 90. The extra ice walls prevented the mob from overrunning us. I forgot to turn on sound so there’s only some filler music, but that might have worked out for the best as the video is extremely boring.